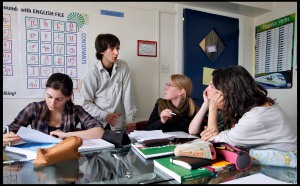 It is well known and globally apparent that the world’s economy is not in the best of shape. As a result, people are forced to tighten their budgets, which often means that further investment in education is neglected.

However, this can often be short-sighted and a miscalculation that could be costly, both in times of economic hardship and in economic prosperity.

In the increasingly globalised world, where business is conducted in many different countries, companies are increasingly looking for those who can meet the demands of this by being bilingual. Indeed, simply typing in the term “bilingual” today into reed.co.uk, my search returned 350 jobs asking for bilingual applicants.

Careerbuilder.com wrote in 2009 that 31% of executives spoke 2 languages in a survey of over 12,000 respondents and in their search results, 6000 jobs were advertised for bilingual applicants. If you remember, 2009 was a particularly difficult year for employment after the global recession hit in 2008 – so it seems logical that applications speaking 2 languages held more of a chance of gaining employment than those who didn’t.

Of course, the case cannot be as black and white as this. However, it does not change the fact that today’s search or the search by Careerbuilder in 2009 created many job opportunities that could not be applied for by someone who speaks only one language.

When searching for jobs, have you ever seen the phrase “bilingual applicant preferred”? I know I have – and I didn’t apply. With my experience and skills to date, I feel that it is highly likely that someone would have comparable skills and also a second language. Which applicant do you think would secure the role? It’s highly likely that the bilingual applicant would have nudged me out of the field, leaving me to continue my search.

Thus, I would say that it is a justifiable case that there is probably more opportunity to gain a role in a tough economy if you are bilingual.

But, what about afterwards?

Well, one would assume, having gained employment at a difficult time, you will be suitably experienced by the time the economy recovers and companies start to grow again. Thus, you would be ideally placed to secure that promotion or, indeed, move to a higher role in a different organisation. You would have gained the experience that many people had failed to achieve in the same time frame and as such, could reap the benefits when purse strings are loosened.

In short, you are doing yourself a massive favour by learning another language.

Therefore, when considering what will bring the best value for your money, when you do not have much spare – it would be a good idea to invest in language study.

It could prove to be the best thing you did for your current and future prospects and see you weather any financial storm that may come in the future.

Error: Twitter did not respond. Please wait a few minutes and refresh this page.